Whether you're at the beginning of planning your next holiday or are putting the finishing touches on your travel itinerary, you probably don't need a reminder that exploring new destinations can have mental and physical benefits: relieving stress, boosting creativity, and improving happiness overall.

Of course, our travel goals are sometimes much more straightforward than that. From local staycations to cross-country adventures, what you eat on holiday can be just as important as the things you see or do.

However, no matter how many social media recommendations you get for the best Insta-worthy cocktails or must-eat fare, it's important to remember that some of the most basic cuisines can be wildly different than your expectations when abroad. Since you'll probably need a relatively well-balanced breakfast to keep you energised while away, it might help to know what most people are having as their most important meal of the day.

To help take the mystery out of your breakfast forecast, we surveyed 731 people from countries like France, Germany, Italy, Thailand, Spain, and more to find out what they're having for their morning meals, whether they're likely to dine in or eat out, and whether you should expect breakfast to be a staple of their diets at all. Whet your appetite and read on to see what we uncovered.

Rise and Shine (and Eat) 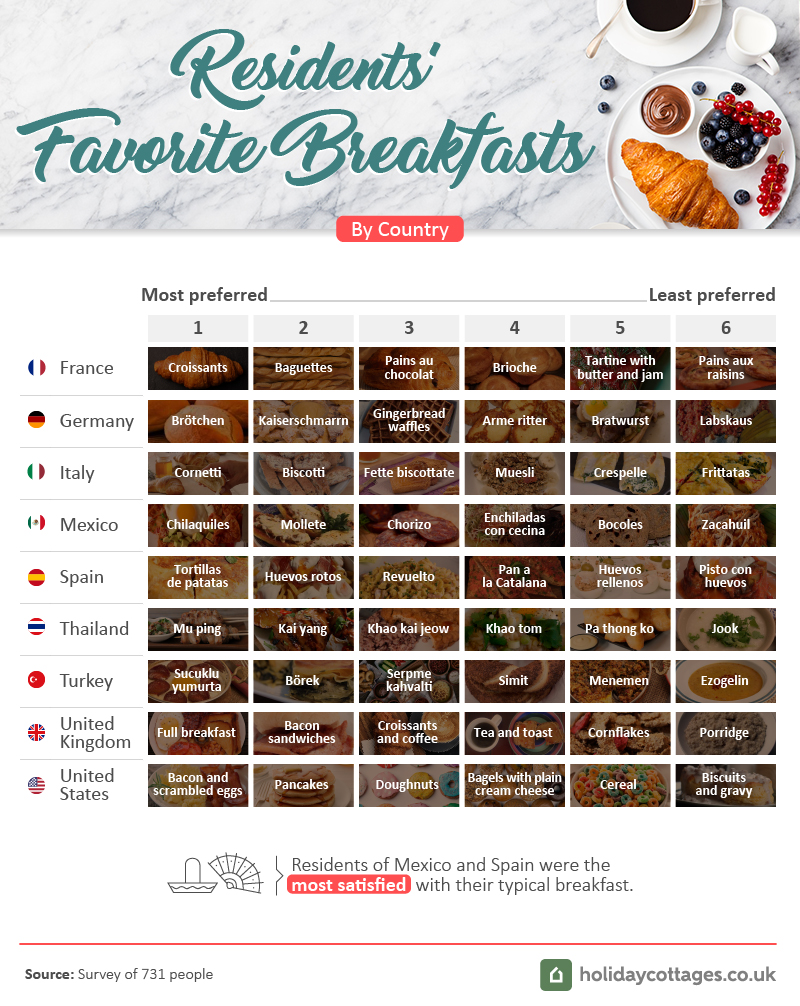 When it came to global breakfast cuisines, most countries fell into one of two categories: flaky pastries or savoury, protein-packed dishes.

Even though carbs may have a reputation for being unhealthy, the right breaded snack can actually help fuel you throughout the day. Whether you decide to pair them with other dishes, pile them high with superfood toppings, or eat them on their own, including bread in your morning meal might not be so bad after all. Expect to find these casual, on-the-go breakfast items as the most popular start to the day in European countries like France, Germany, and Italy, where croissants, baguettes, brötchen, and cornetti ranked as the most common breakfast fare.

In other countries, don't expect the most common morning meals to be quick eating options, though. Various forms of egg-based breakfast foods were among the most popular in countries like Spain, Turkey, the U.K., and the U.S. From the sucuklu yumurta of Turkey (a type of egg and sausage dish) to the tortilla de patatas of Spain and American bacon and scrambled eggs, there's no one way to enjoy this quintessential breakfast food.

Just two countries broke the tradition of the most beloved menu items being either eggs or bread: Thailand and Mexico. Grilled meat may not seem like a traditional morning cuisine, but in Thailand, mu ping ranked above other options including gai yang and khao kai jeow (an omelette-type meal). And in Mexico, it was chilaquiles – the traditional leftovers dish – that came out on top.

Your Interactive Guide to Breakfast

No matter which of the popular breakfast meals you're planning to enjoy, it's healthy to know exactly how many calories you're taking on. This interactive guide will help you understand the average nutritional values associated with each country's most popular breakfast dishes. Knowing how many carbs you're likely to consume (nearly 50 grams in a traditional German breakfast of Arme ritter), or the amount of protein you'll eat (almost 28 grams in Thai Khao Tom), is a great way to plan the rest of your meals better!

With so many amazing options to choose from, it's easy to feel full just thinking about all the dining options. You'll want to fit in all of the top-rated restaurants and cafes while you're on holiday, so that might mean eating more than you'd traditionally make room for on any other day. Beyond accidentally packing on a few extra pounds during your travels (who hasn't been there?), overeating while you're away could prevent you from getting to the other things on your itinerary.

No matter which of the popular breakfast meals you're planning to enjoy, it's healthy to know exactly how many calories you're taking on. This interactive guide will help you understand the average nutritional values associated with each country's most popular breakfast dishes. Knowing how many carbs you're likely to consume (nearly 50 grams in a traditional German breakfast of Arme ritter), or the amount of protein you'll eat (almost 28 grams in Thai Khao Tom), is a great way to plan the rest of your meals better! 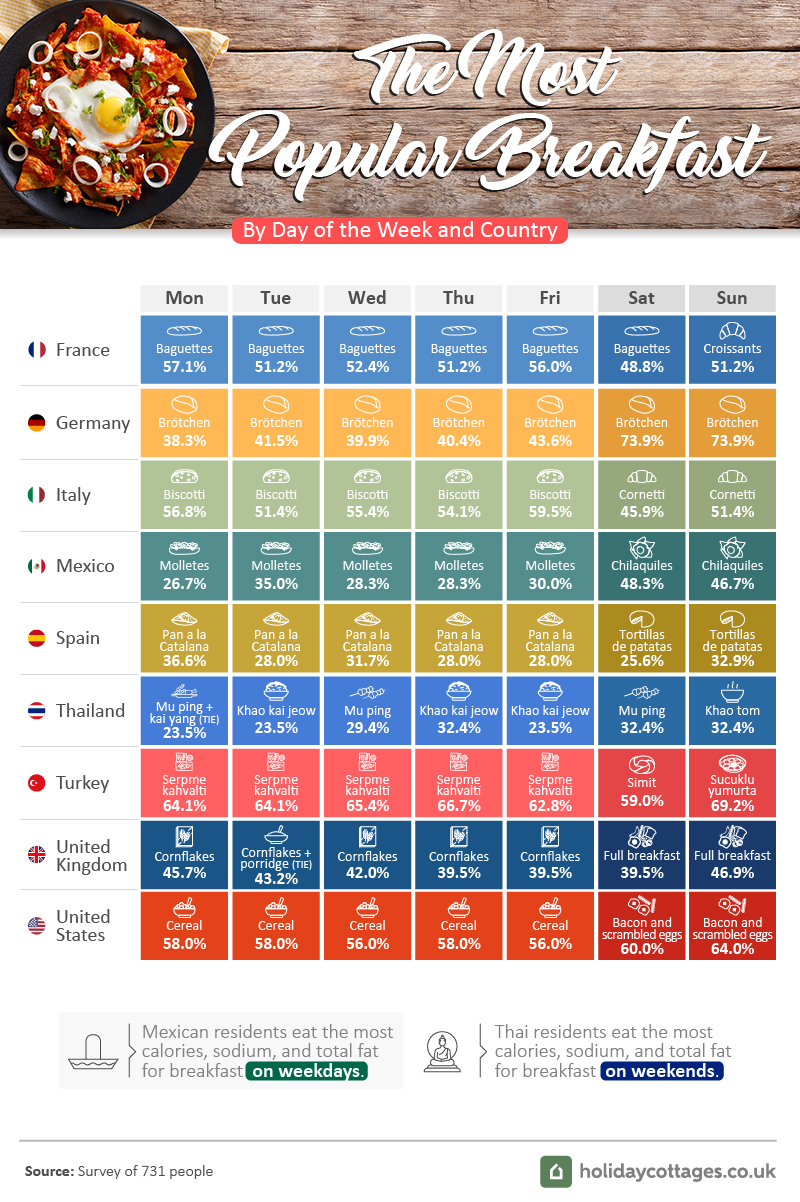 Just like how mimosas and eggs Benedict have become synonymous with Sunday brunch in America, standard breakfast cuisines around the world may vary based on which days of the week you're visiting.

Just because bacon and scrambled eggs ranked as the most popular morning meal in the U.S. doesn't mean everyone cooks a warm breakfast on their way out the door. In fact, some of the most popular breakfast foods may be more of a weekend indulgence than standard fare. As in the U.K., cornflakes were more common than a full breakfast meal throughout the week. Similarly, just because croissants may seem like the quintessential French food, most locals only enjoyed them on Sundays and opted for baguettes nearly every other day of the week. 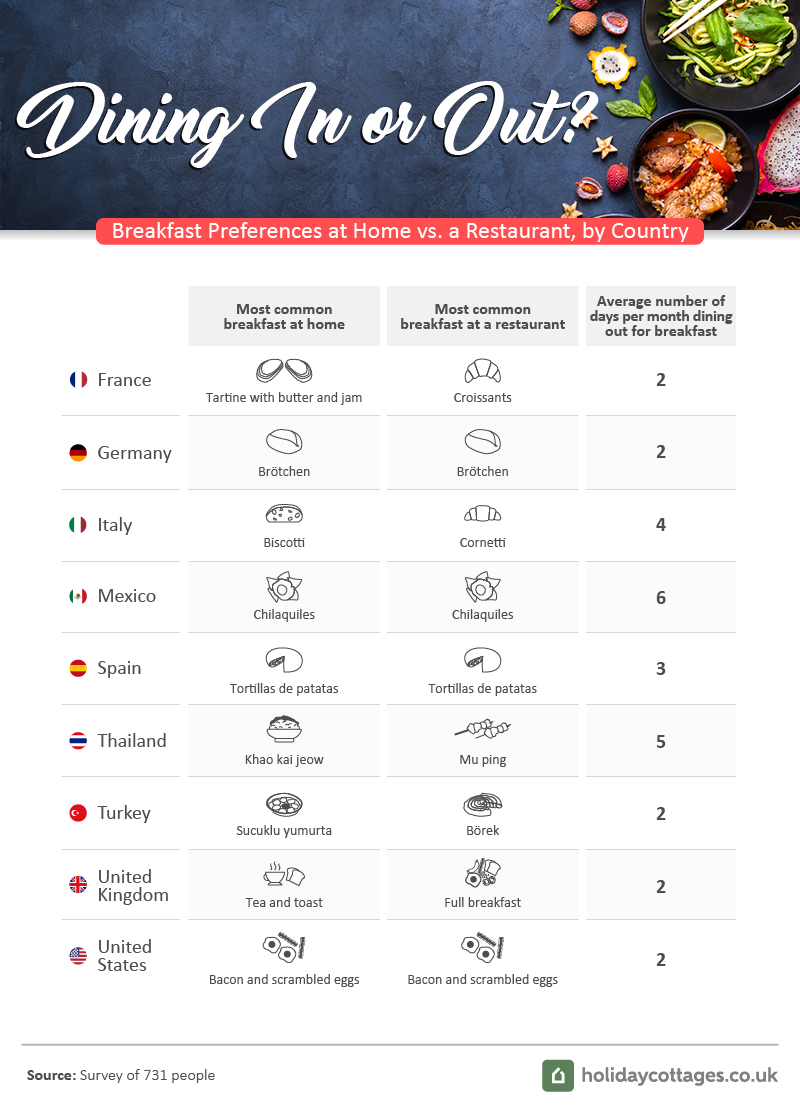 One of the biggest travel costs won't just be your flight or accommodations – it could also be your food. If you're travelling internationally, 12 days of food and drinks could rack up a bill of $520.

When clipping coupons and cooking for yourself aren't an option, the best way to save on holiday food expenses typically involves deciding when and how often you should sit down for a meal versus grabbing something to go. Figuring out where (and when) the locals like to eat could be a key factor in reducing unnecessary spending.

While locals from countries including Mexico and Thailand may eat out for breakfast between five and six times a month, on average, other nations might not consider it necessary to dine out for their first meal. In France, Germany, Turkey, the U.S., and the U.K., locals only ate out for breakfast twice a month. While the dining locale didn't change what Germans or Americans liked to munch on in the mornings, butter and jam or tea and toast were more common at-home breakfast options for those in France and the U.K.

Getting the Energy You Need 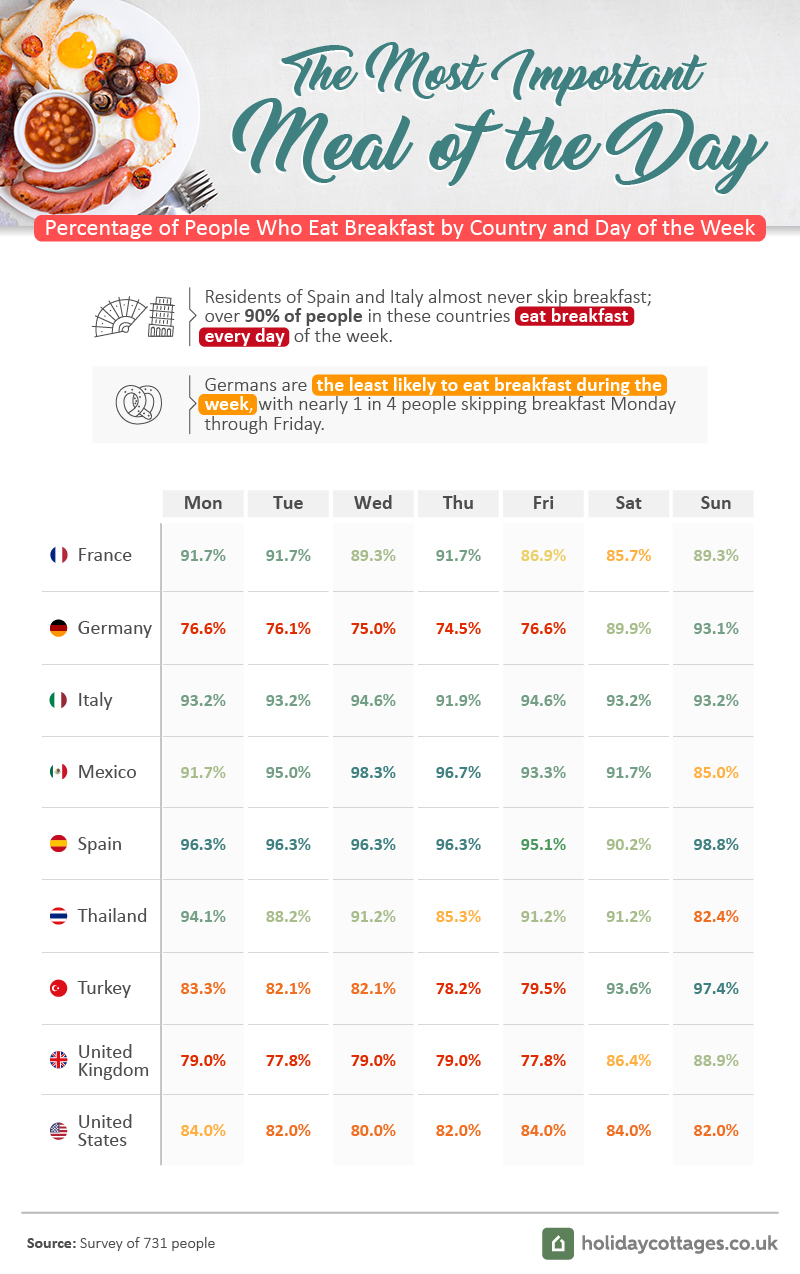 Growing up, you probably heard that breakfast was "the most important meal of the day" – and this one may have some research-based merit to it. Eating breakfast won't just help keep you energised throughout the day, but also it can help kick-start your metabolism, increase cognitive function, and help regulate other immune functions. As with all meals, what you eat is just as important as when you eat it.

In Germany and the U.K., more than half of locals went out of their way to fill up before heading out the door, particularly on weekdays. In Germany, less than 75 percent of people ate breakfast on Thursdays, and in the U.K., fewer than 78 percent had their morning nosh on Tuesdays and Fridays.

While trends were somewhat similar in the U.S. and Turkey, breakfast earned its spot as one of the most crucial parts of the day in Spain, Italy, and France.

The Meal With Most

Even if countries across the globe don't all have the same menu items or staple dishes, odds are wherever you're going, breakfast will be a part of the adventure. If you're travelling with your taste buds in mind, certain countries are sure to delight your palate.

In France, Germany, and Italy, expect flaky pastries and fresh baked goods for your morning meal. And if the standard egg dishes in Spain and the U.S. aren't quite doing it for you, it might be worth considering the more eclectic tastes of Thailand or Mexico instead. No matter where you're going, or what you decide to eat, remember that every meal is an opportunity to be a part of a cultural experience – from how it's prepared to the way you eat it.

When you're ready to start planning your next getaway, let holidaycottages.co.uk be your guide. Our award-winning team of travel experts will help you find the perfect self-catering accommodation, wherever in the wold you may be. From holiday cottages with hot tubs to luxury "glamping" and unique shepherds huts, we know there-s no one way to see the world. visit us at holidaycottages.co.uk to explore our travel partners and far-off destinations today.

To find out what people around the world are eating for breakfast, we conducted a survey of residents in France, Germany, Italy, Mexico, Spain, Thailand, Turkey, the U.K., and the U.S. These countries were selected from the United Nations' 2016 World Tourism Organization (UNWTO) list of the most visited countries. On average, each country had 46 male respondents and 35 female respondents with an average total respondent age of 32 years old.

For total respondents by country, see the list below.

Our data relied on a self-reported survey, which can skew results based on the sample. Also, we only asked about six popular breakfasts per country, and this project is not meant to be indicative of national nutritional or consumption habits in the respective countries. China was excluded from our study due to issues surveying their residents about breakfast habits.

Are your readers hungry for more? We welcome any citations or attributions of this project so long as they are for noncommercial purposes and you link back to this study on your page.